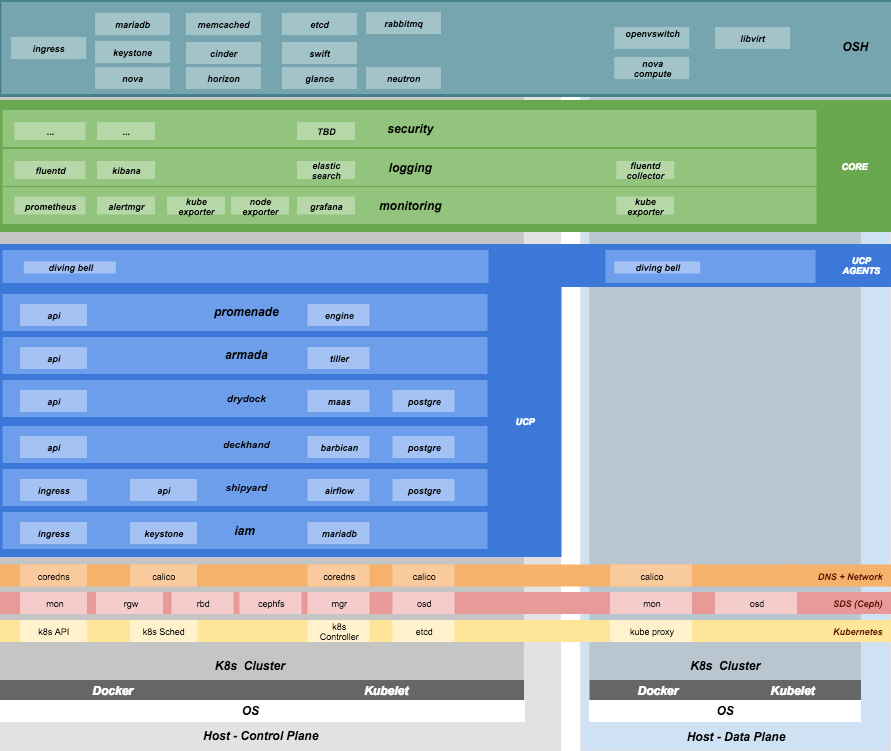 Environment Ceph parameters for the control plane are located in:

If you have an operating system available on the target hardware, you can determine HDD and SSD layout with:

In case #1, the SSDs will be used for journals and the HDDs for OSDs.

For journals, divide the number of journal disks as evenly as possible between the OSD disks. We will also use the whole block device, however we cannot pass that block device to the Ceph chart like we can for the OSD disks.

Instead, the journal devices must be already partitioned, formatted, and mounted prior to Ceph chart execution. This should be done by MaaS as part of the Drydock host-profile being used for control plane nodes.

Then, the data section of this file would look like:

where the following mount is setup by MaaS via Drydock host profile for the control-plane nodes:

In case #2, Ceph best practice is to allocate journal space on all OSD disks. The Ceph chart assumes this partitioning has been done beforehand. Ensure that your control plane host profile is partitioning each disk between the Ceph OSD and Ceph journal, and that it is mounting the journal partitions. (Drydock will drive these disk layouts via MaaS provisioning). Note the mountpoints for the journals and the partition mappings. Consider the following example where:

Then, the data section of this file will look similar to the following:

where the following mounts are setup by MaaS via Drydock host profile for the control-plane nodes:

Likewise, before running the simple-deployment.sh script, you should refer to the data/images/ucp/promenade/promenade field in ~/airship-treasuremap/global/v4.0/software/config/versions.yaml. If there is a pinned reference (i.e., any image reference that's not latest), then this reference should be used to set the IMAGE_PROMENADE environment variable. For example, if the Promenade image was pinned to quay.io/airshipit/promenade:d30397f... in the versions file, then export the previously mentioned environment variable like so:

In order to do this, first you must determine the kernel version that will be deployed to those nodes. Start by looking at the host profile definition used to deploy other control plane nodes by searching for control-plane: enabled. Most likely this will be a file under global/v4.0/profiles/host. In this file, find the kernel info -e.g.:

In this case, it is the hardware enablement kernel for 16.04. To find the exact kernel version that will be deployed, we must look into the simple-stream image cache that will be used by MaaS to deploy nodes with. Locate the data/images/ucp/maas/maas_cache key in within airship-treasuremap/global/v4.0/software/config/versions.yaml. This is the image that you will need to fetch, using a node with docker installed that has access and can reach the site/location hosting the image. For example, from the build node, the command would take the form:

Then, create a container from that image:

Then use the container ID returned from the last command as follows:

In the container, cd to the following location (substituting for the platform image and platform kernel identified in the host profile previously, and choosing the folder corresponding to the most current date if more than one are available) and run the file command on the boot-kernel file:

This will produce the complete kernel version. E.g.:

In this example, the kernel version is 4.13.0-43-generic. Define any proxy environment variables needed for your environment to reach public ubuntu package repos, and install the matching kernel on the Genesis host (make sure to run on Genesis host, not on the build host):

Lastly if you wish to cleanup your build node, you may run the following:

Add the list of NTP servers specified in data/ntp/servers_joined in file airship-treasuremap/site/$NEW_SITE/networks/common-address.yaml to /etc/ntp.conf as follows:

Until genesis node reprovisioning is implemented, it is necessary to manually perform host-level disk partitioning and mounting on the genesis node, for activites that would otherwise have been addressed by a bare metal node provision via Drydock host profile data by MaaS.

For example, if we have a journal SSDs /dev/sdb on the genesis node, then use the cfdisk tool to format it:

Then, construct an XFS filesystem on the journal partition with XFS:

Create a directory as mount point for /dev/sdb1 to match those defined in the same host profile ceph journals:

Use the blkid command to get the UUID for /dev/sdb1, then populate /etc/fstab accordingly. Ex:

Repeat all preceeding steps in this section for each journal device in the Ceph cluster. After this is completed for all journals, mount the partitions:

Likewise, before running the deckhand_load_yaml.sh script, you should refer to the data/images/ucp/shipyard/shipyard field in airship-treasuremap/global/v4.0/software/config/versions.yaml. If there is a pinned reference (i.e., any image reference that's not latest), then this reference should be used to set the SHIPYARD_IMAGE environment variable. For example, if the Shipyard image was pinned to quay.io/airshipit/shipyard@sha256:dfc25e1... in the versions file, then export the previously mentioned environment variable:

Export valid login credentials for one of the Airship Keystone users defined for the site. Currently there is no authorization checks in place, so the credentials for any of the site-defined users will work. For example, we can use the shipyard user, with the password that was defined in airship-treasuremap/site/$NEW_SITE/secrets/passphrases/ucp_shipyard_keystone_password.yaml. Ex:

Next, run the deckhand_load_yaml.sh script as follows: