This document lists the main components of , and gives some description of how each component is used. There are links to additional sources of information throughout the document.

is a community developed approach and set of tools for deploying, and managing an OpenStack cloud.

TripleO is the friendly name for “OpenStack on OpenStack”. It is an official OpenStack project with the goal of allowing you to deploy and manage a production cloud onto bare metal hardware using a subset of existing OpenStack components.

With TripleO, you start by creating an "undercloud" (a deployment cloud) that will contain the necessary OpenStack components to deploy and manage an "overcloud" (a workload cloud). The overcloud is the deployed solution and can represent a cloud for any purpose (e.g. production, staging, test, etc).

TripleO leverages several existing core components of OpenStack including Nova, Ironic, Neutron, Heat, Glance and Ceilometer to deploy OpenStack on baremetal hardware. Nova and Ironic are used in the undercloud to manage baremetal instances that comprise the infrastructure for the overcloud. Neutron is utilized to provide a networking environment in which to deploy the overcloud, machine images are stored in Glance, and Ceilometer collects metrics about your overcloud.

The following diagram illustrates a physical view of how the undercloud may be hosted on one physical server and the overcloud distributed across many physical servers. 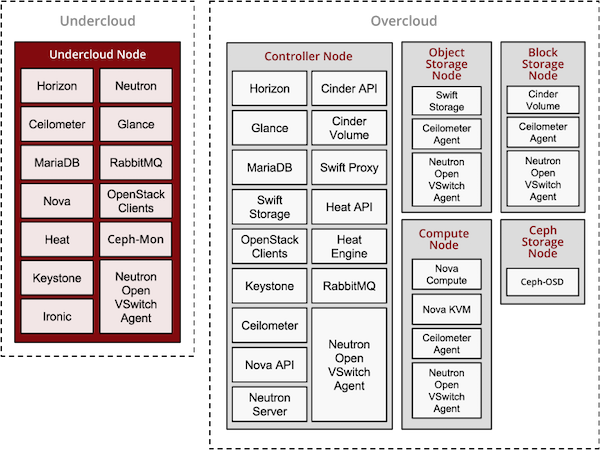 Some key aspects of SpinalStack workflow have been incorporated into , providing options to perform introspection, benchmarking and role matching of your hardware prior to deploying OpenStack.

Hardware introspection features enable you to collect data about the properties of your hardware prior to deployment, such that specific classes of hardware may be matched to specific roles (e.g. a special hardware configuration for Compute or Storage roles). There is also the option to enable performance benchmarking during this phase, such that outliers which do not match the expected performance profile may be excluded from the deployment.

also configures servers in a similar way to SpinalStack, using stable community puppet implementations, applied in a series of steps, such that granular control and validation of the deployment is possible

Using 's combination of OpenStack components, and their APIs, as the infrastructure to deploy and operate OpenStack itself delivers several benefits:

It should be noted that not everything in is a reused OpenStack element.

Next step is to install the undercloud. We install undercloud using Instack's script and it calls puppet scripts in the background.

For development or proof of concept (PoC) environments, Quickstart can also be used.

Before deploying the overcloud, you must first download or build images which will be installed on each of the nodes of the overcloud. TripleO uses diskimage-builder for building these so called "Golden Images". The diskimage-builder tool takes a base image e.g. CentOS 7 <http://cloud.centos.org/centos/7/images/ CentOS-7-x86_64-GenericCloud.qcow2> and then layers additional software via configuration scripts (called elements) on top of that. The final result is a qcow2 formatted image with software installed but not configured.

While the diskimage-builder repository provides operating-system specific elements, ones specific to OpenStack, e.g. nova-api, are found in tripleo-image-elements. You can add different elements to an image to provide specific applications and services. Once all the images required to deploy the overcloud are built, they are stored in Glance running on the undercloud.

Deploying the overcloud requires suitable hardware. The first task is to register the available hardware with Ironic, OpenStack's equivalent of a hypervisor for managing baremetal servers. Users can define the hardware attributes (such as number of CPUs, RAM, disk) manually or he can leave the fields out and run introspection of the nodes afterwards.

The sequence of events is pictured below: 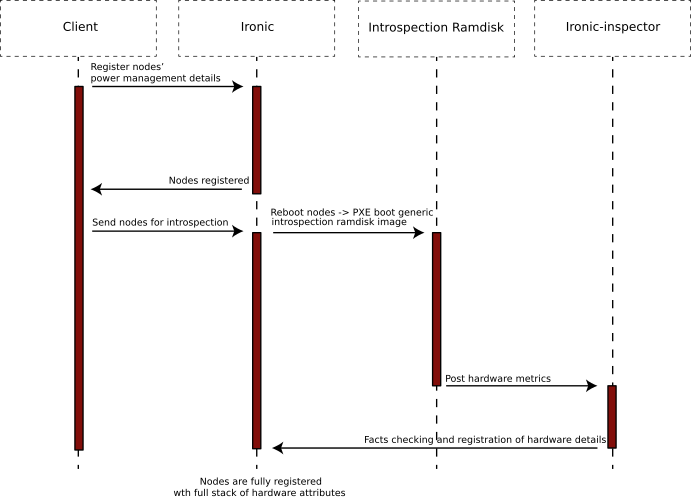 When users are creating virtual machines (VMs) in an OpenStack cloud, the flavor that they choose specifies the capacity of the VM which should be created. The flavor defines the CPU count, the amount of RAM, the amount of disk space etc. As long as the cloud has enough capacity to grant the user's wish, and the user hasn't reached their quota limit, the flavor acts as a set of instructions on exactly what kind of VM to create on the user's behalf.

In the undercloud, where the machines are usually physical rather than virtual (or, at least, pre-existing, rather than created on demand), flavors have a slightly different effect. Essentially, they act as a constraint. Of all of the introspected hardware, only nodes which match a specified flavor are suitable for a particular role. This can be used to ensure that the large machines with a great deal of RAM and CPU capacity are used to run Nova in the overcloud, and the smaller machines run less demanding services, such as Keystone.

is capable of handling flavors in two different modes.

The simpler PoC (Proof of Concept) mode is intended to enable new users to experiment, without worrying about matching hardware profiles. In this mode, there's one single, global flavor, and any hardware can match it. That effectively removes flavor matching. Users can use whatever hardware they wish.

For the second mode, named Scale because it is suited to larger scale overcloud deployments, flavor matching is in full effect. A node will only be considered suitable for a given role if the role is associated with a flavor which matches the capacity of the node. Nodes without a matching flavor are effectively unusable.

Whole part of planning your deployment is based on concept of overcloud roles. A role brings together following things:

In the case of the "Compute" role:

Currently, the roles in are very prescriptive, and in particular individual services cannot easily be scaled independently of the Controller role (other than storage nodes). More flexibility in this regard is planned in a future release.

Customizable things during deployment planning are:

Deployment to physical servers happens through a collaboration of Heat, Nova, Neutron, Glance and Ironic.

The Heat templates and environments are served to Heat which will orchestrate the whole deployment and it will create a stack. Stack is Heat's own term for the applications that it creates. The overcloud, in Heat terms, is a particularly complex instance of a stack.

In order for the stack to be deployed, Heat makes successive calls to Nova, OpenStack's compute service controller. Nova depends upon Ironic, which, as described above has acquired an inventory of introspected hardware by this stage in the process.

At this point, Nova flavors may act as a constraint, influencing the range of machines which may be picked for deployment by the Nova scheduler. For each request to deploy a new node with a specific role, Nova filters the list of available nodes, ensuring that the selected nodes meet the hardware requirements.

Once the target node has been selected, Ironic does the actual provisioning of the node, Ironic retrieves the OS image associated with the role from Glance, causes the node to boot a deployment ramdisk and then, in the typical case, exports the node's local disk over iSCSI so that the disk can be partitioned and the have the OS image written onto it by the Ironic Conductor.

will use Pacemaker to achieve high-availability.

Current HA solution is being developed by our community.

After the overcloud deployment is completed, it will be possible to monitor, scale it out or perform basic maintenance operations via the CLI.

When the overcloud is deployed, Ceilometer can be configured to track a set of OS metrics for each node (system load, CPU utilization, swap usage etc.)

Additionally, Ironic exports IPMI metrics for nodes, which can also be stored in Ceilometer. This enables checks on hardware state such as fan operation/failure and internal chassis temperatures.

The metrics which Ceilometer gathers can be queried for Ceilometer's REST API, or by using the command line client.

There are plans to add more operational tooling to the future release.

The process of scaling out the overcloud by adding new nodes involves these stages: